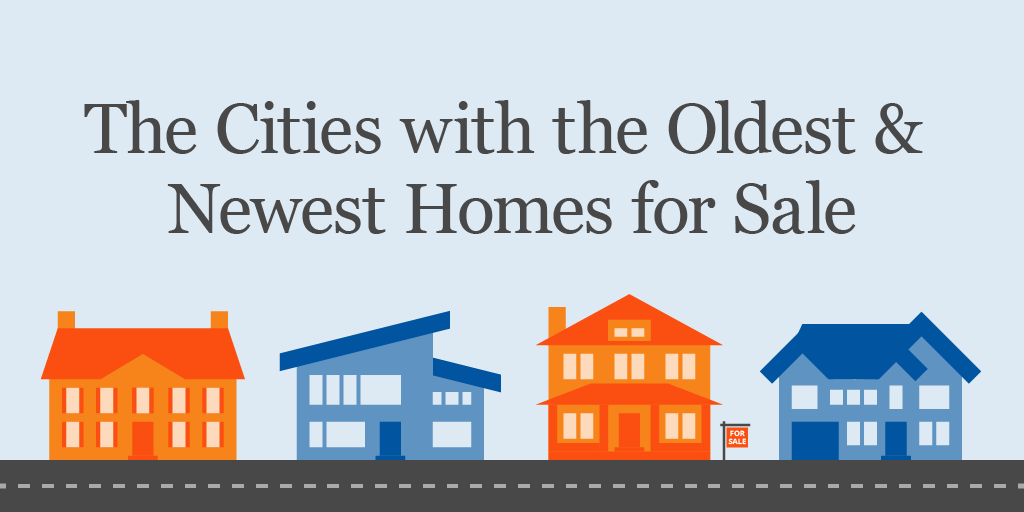 Let’s face it — after a year of quarantining and social distancing, Zoom socials, working from the couch instead of a bustling office, being at home has gotten a bit old. Even brand new houses can feel “same old, same old” when we’re unable to travel, visit friends, or spend the day reading in a coffee shop instead of our living rooms. Still, when it comes to houses, the difference between feeling old and being old is significant. And while some people love the history and character of older homes, others prefer that new paint smell, sleek architecture and state-of-the-art appliances. So, we wanted to know: where in the United States are the oldest and newest homes for sale? Here’s what we found!

Using Homes.com’s “Year Built” filter, we searched for listings within each city built by 1940, before 2000, in 2000 or later, and between 2016 and 2020. These date ranges allowed us to separate listings into four categories: pre-war homes, older homes, newer homes, and modern homes. To establish parameters for “older” and “newer” houses, we looked to arguably the most important part of a house—the roof. Roofing typically lasts between 20-30 years. We decided on the earlier end of needing a replacement roof, and determined any house built before 2000 to be “older,” while anything built in 2000 or later (and just reaching the age of needing a first roof replacement) is “newer.” For the most modern homes in our review, we looked to the last four years for listings in every city.

Homes built between 1890 and 1940 underwent a transition in both design and function, developed with a greater emphasis on artistry and comfort. Decorative moldings, soaring ceilings, and charming fireplaces became standard elements in pre-war home architecture, and many of these features make such houses even more attractive to today’s buyers. But where will buyers looking for pre-war houses have the most luck? The Eastern United States.

Providence, Rhode Island has the highest number of pre-war houses for sale, with almost 45% of the city’s overall listings built by 1940. Despite a devastating hurricane in 1954 and $41 million dollars worth of damage, the city’s pre-war homes remain standing. Six other Northeastern cities—New York, Philadelphia, Boston, Buffalo, Hartford, and Pittsburgh—also have significant numbers of pre-war home listings. It’s worth noting that all seven of these cities have pre-revolutionary roots and are home to some of the earliest European settlements of the United States. While today’s pre-war houses aren’t that old, it’s fitting to find so many of them in cities with such historic beginnings.

If you aren’t looking for a house built before the invention of color television but still want something with age and character, homes built before 2000 make up at least half of the listings in most of the 20 cities with the highest numbers of older homes. Interestingly, many of these cities also rank highly among cities with the most pre-war listings. 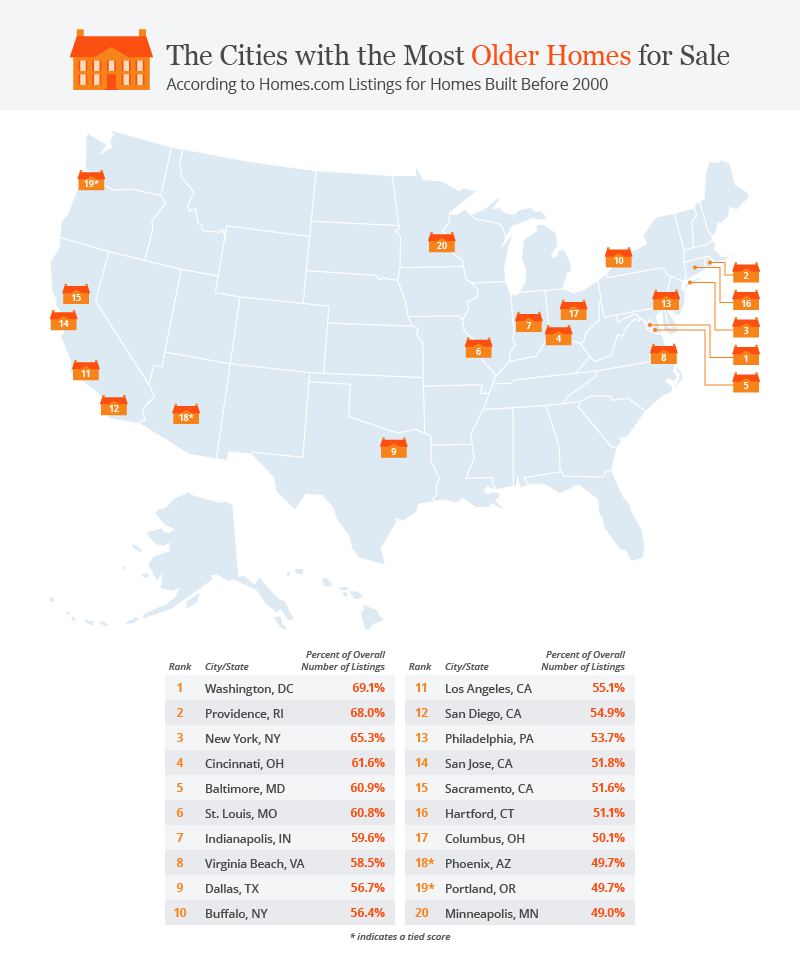 Both Washington D.C., at the top of the list with over 69% of older homes in the city’s listings, and Minneapolis, filling the final spot on the list at 49%, have significant numbers of pre-war listings as well. Of the 20 cities with the most older homes for sale, only seven are not also among the 20 cities with the most pre-war home listings—Indianapolis, Virginia Beach, Dallas, San Diego, San Jose, Sacramento, and Phoenix.

The turn of the century ushered in new styles of houses, from smart homes to tiny homes, but also new industries and job markets. Advancements in agriculture, technology, and manufacturing meant expanded opportunities for college graduates and others seeking stable and future-facing employment—often in unexpected places. As a result, lesser known cities with ties to such industries, like Raleigh, Portland, and San Diego, experienced notable population growth after the year 2000, and all of those relocated people needed somewhere to live. New construction was the answer.

While booming job markets, affordable housing, and higher standards of living may explain construction in many of the cities with the most newer homes for sale, the case may be one of rebuilding rather than breaking new ground in New Orleans. Hurricane Katrina in 2005 left 80% of the city under water, when the failure of the city’s levee systems resulted in severe flooding in much of its residential areas. Today, new construction constitutes almost 41% of home listings in New Orleans.

If state of the art appliances, brand new building materials, and the latest technology are important components of your future home, you may want something built in the last four years. While most of the cities with high numbers of pre-war homes were located in the Northeast, modern construction seems to be more spread out across the southern part of the country. 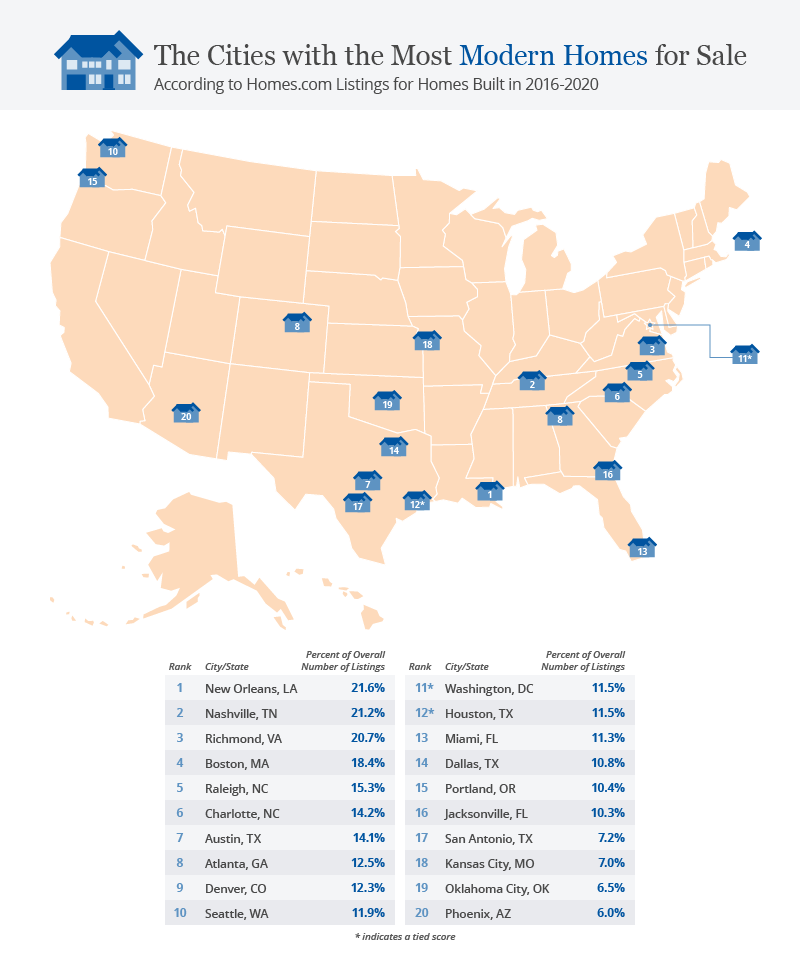 New Orleans takes the number one spot again, with almost 22% of the city’s listings made up of modern homes. Cities that have continued to grow alongside key industries, like Raleigh and Seattle, also make an appearance on this list. Of the 20 cities with the most modern homes for sale, all but three—San Antonio, Kansas City, and Oklahoma City, also have the highest numbers of new homes for sale. If you’re looking to be at the top of a house’s line of ownership, look southward.

With rising costs of living and low inventory of affordable housing, finding a home can be overwhelming. Whether you’re looking for a home that saw an American family through World War II or a home that reflects the latest technology and architectural trends, Homes.com can take the stress out of house hunting. Explore what’s available in your area and start your home-buying experience today!

See more posts by this author

Homes.com is where you connect with real estate professionals to find your forever home the #simplysmarterway 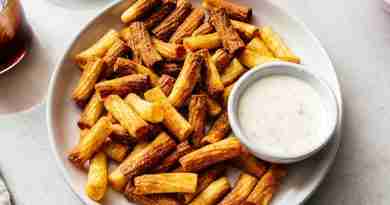 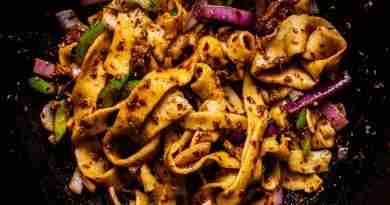 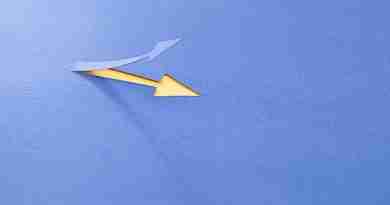