The 80s are back and I’m all for it! Give me hair scrunchies, neon, and ALL the casseroles. I don’t know why casseroles have such a bad reputation. They’re one dish, they’re creamy, they taste good, and there’s almost always leftovers. Chicken spaghetti is one of those casseroles that needs a little Tiktok glow up because it is good and more people need to make it. Why should baked feta pasta have all the fun?

If you haven’t had it, chicken spaghetti is pure comfort food goodness. Tender pieces chicken mixed with spaghetti, tomatoes, and peppers in a creamy cheesy sauce. Back in the day it was made with canned soup but we can do better than that! And what’s more we can make it all in one pan so there’s minimal clean up.

What is chicken spaghetti

Chicken spaghetti is an American baked spaghetti dish made with a cream sauce, topped with cheese and baked until bubbly. The spaghetti is broken up in small pieces before being cooked.

Why this chicken spaghetti

There are, admittedly, lots of chicken spaghetti recipes out there. What makes this one different is that it’s a one pot chicken spaghetti that can go straight from the stove to the oven to the dinner table. Most pasta dishes, as I’m sure you know have you cook pasta in a large pot of salted water, drain it, then add it to the sauce. We’re going to use the one pot pasta method where pasta is cooked right into the sauce. When you do this the pasta becomes extra flavorful because it’s being cooked in sauce instead of water. The result is a chicken spaghetti that is extremely delicious, creamy, and perfectly cooked.

How to make chicken spaghetti 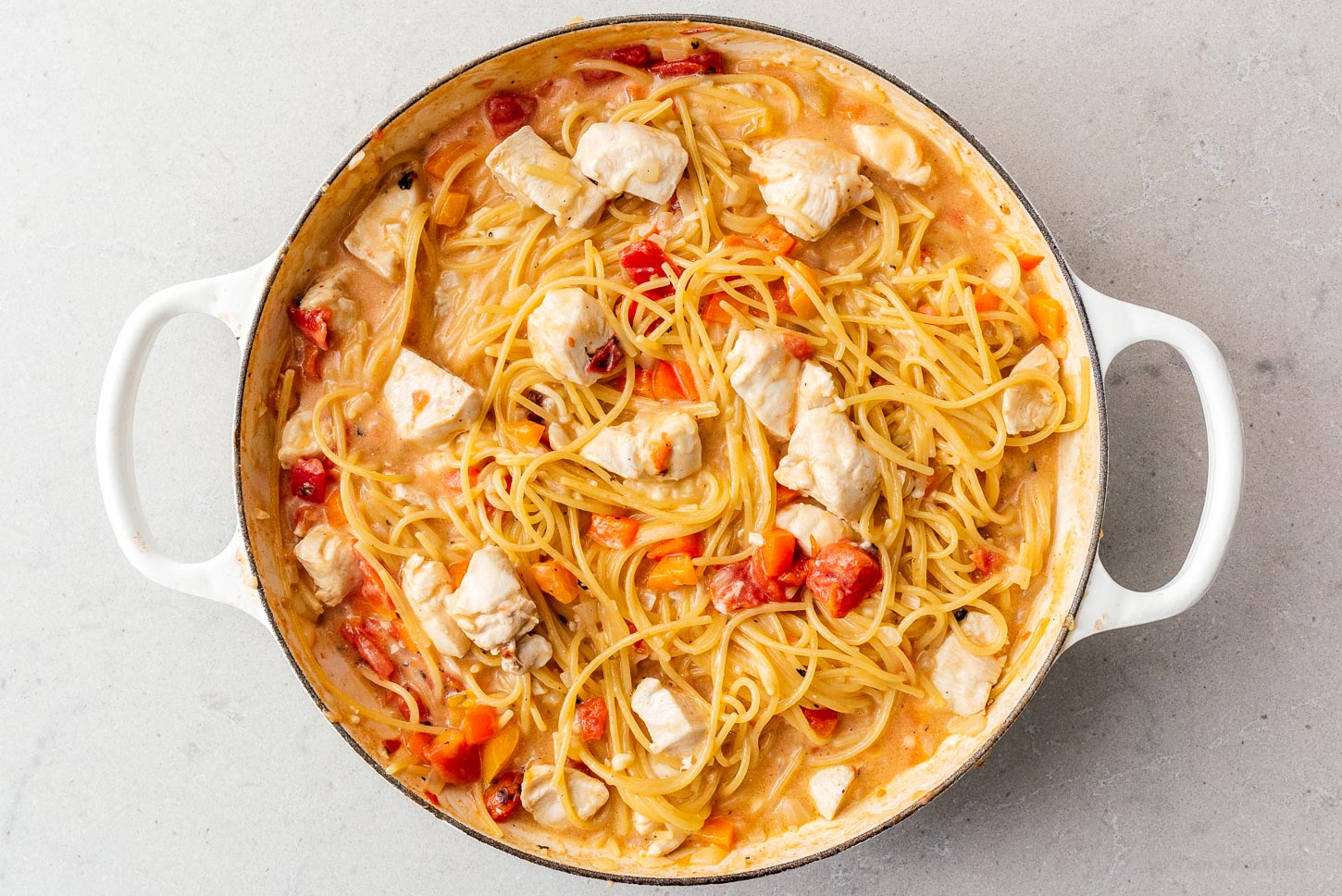 What is one pot pasta?

One pot pasta is a pasta cooking method that was popularized by Martha Stewart back in the early 2000s. It’s a way of cooking pasta where you don’t need to drain the pasta water. Everything, including all of the ingredients for the sauce are put in a large, wide pan along with extra liquid that boils up and cooks the pasta. After the pasta is cooked, it’s tossed until it’s glossy and coated. I love one pot pasta because you can really get a lot of flavor into the noodles because you’re cooking it in sauce instead of water.

Do I need to break the spaghetti?

You don’t have to, but if you want that classic American style, break that pasta! I opted to keep my spaghetti long because I love slurping noodles, but either way tastes amazing. If your pot isn’t wide enough to put all the pasta into the pan, laying flat, I would break the spaghetti so it fits. 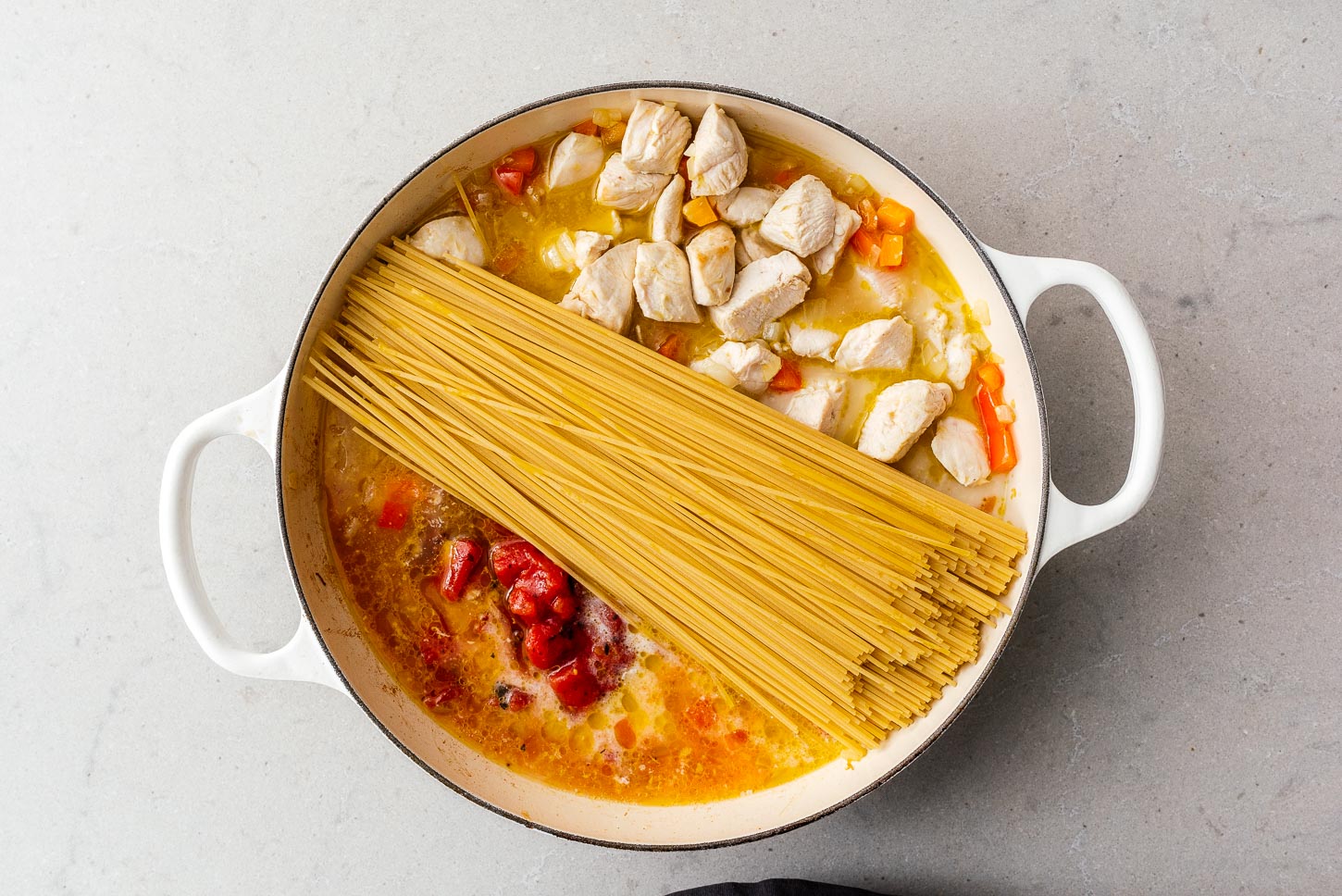 What about other pasta shapes?

Feel free to use other kinds of short pasta. I’m pretty sure people used broken short spaghetti back in the day because there wasn’t as much pasta variety available.

What to serve with chicken spaghetti

This is a rich and filling casserole that doesn’t need much support from side dishes. If you’re going all out, serve it with these:

Can I use precooked chicken?

Absolutely. If you want to use rotisserie or leftover chicken, just shred it or chop it. You’ll need about 4 cups.

Do I have to use peppers?

If you’re not a fan of bell peppers, you can leave them out. You can even substitute any kind of hearty vegetables you like.

Can I use another kind of pasta?

Any sort of dry pasta will work with this recipe, except perhaps lasagna noodles.

What kind of baking dish should I use?

Do I need to bake it?

Nope! In fact sometimes I just make this in the pan and eat it as is like an extra creamy chicken spaghetti. It tastes amazing unbaked but baked is also super cozy, it’s up to you.

Make the casserole and top it with the cheese but don’t bake it. Cool completely and cover tightly and refrigerate up to 2 days. Bake in a 375°F oven, covered with foil for 30 minutes, then remove the foil and bake until bubbly and golden.

To reheat you can either portion it out and microwave it or you can bake the entire casserole, covered in foil, in a 375°F oven for 30 minutes, then remove the foil and bake until bubbly. 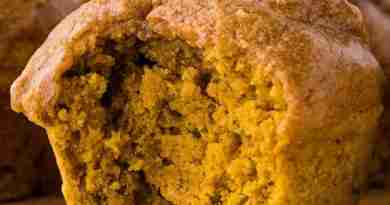 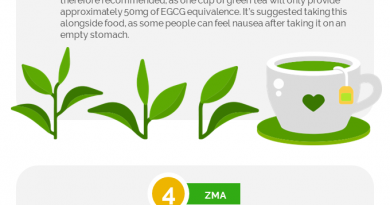 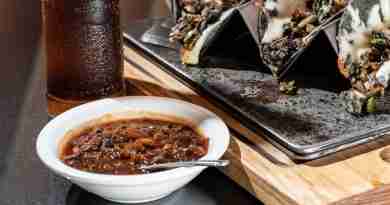